DescriptionScreenShotsSystem RequirementsTRAILER.NFO
About This Game
With a emotionally resonating soundtrack and beautiful visual art style, Heroine Anthem Zero is the first installment in an epic fantasy adventure game from WindThunder Studio. Gameplay features 2D side-scrolling movement and combat, simple and intuitive controls — yet at the heart of the game is our trademark storytelling. A hybrid between game and story, it may not be for the hardcore platform gamer, but yet if you are intrigued by a story over ten years in the making, come and enter the stunningly moving world of adventure from long ago.

The story begins with the last Cataclysm, with the descendants of the Savior rebuilding the land around the World Tree Terasyr. Thousands of years later the Engora Dynasty grows into prosperity, with Fae and Human together resisting the encroaching advances of evil from the edges of the world, and deathly Longhorn Woods.
As fate brings Wanin the Forest Keeper and the wandering cat-girl Shama Kutami together, the entangling web of destinies unfolds. In a world unforgiven by God, their fight for survival unknowingly bears the weight and sins of thousands of generations hereafter.

key Features
1. Available in English for the first time! Heroine Anthem Zero is the first game in the series to support English!

4. A hauntingly beautiful soundtrack, following in the tradition of the Heroine Anthem series: famous composers (known for their work in RPG classics such as Chinese Paladin series) as well as Japanese composers new to the series have joined forces to produce unforgettable music.

5. Weapons and skills — Character progression is closely tied to the weapon and items in Heroine Anthem Zero, switching weapons changes damage and other attributes,as well as attack motions. Weapons can also interact with the stage levels. 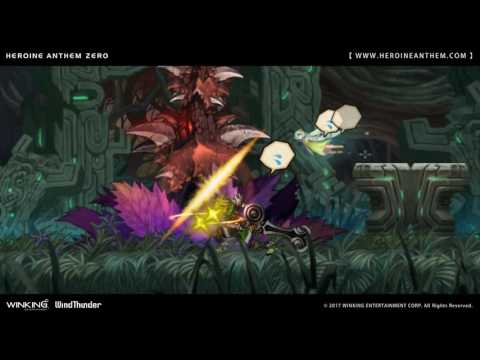 Release Date : 12/2016 Protection : Steam
Discs : 1 Genre : Action
Heroine Anthem Zero is a 2D side-scrolling action RPG, the first of
the classic Heroine Anthem series to be available overseas.
Beginning in 2002, the series has been a pinnacle of storytelling
for the Chinese gaming community. And now, 14 years after Heroine
Anthem 2, Windthunder Studios has released an all-new episodic
prequel, bringing fans back to the beautifully moving world of
adventure from long ago.