DescriptionScreenShotsSystem RequirementsTRAILER.NFO
About This Game
The Empire has arrived. Their honor-bound culture wields hyper-advanced technology, while bowing to the ancient traditions of kings and queens. Their grand empire was destroyed by an unknown enemy. Now their refugee fleet settles the rimworld, and seeks allies.

Colonists can gain royal titles bestowed by the Empire, if you choose.

Build luxurious bedrooms and grand throne rooms for your noble as they rise through the royal ranks. Dress them in finery fit for a king. They’ll make speeches from the throne, inspiring or demoralizing your people depending on their abilities. They’ll play piano, harp, and harpsichord for pleasure and in concert. A Knight or Count can call upon the Empire’s elite troops in times of need, or build psychic focus by meditating on the throne.

Choose how you want to develop your colonists’ psychic power. Serve the Empire to recieve powers for your titled knights and barons. Alternatively, take the tribal route and commune with the mysterious anima tree. Or, rebel against the Empire and use stolen psychic technology.

Whatever its source, those with a psychic link can blind enemies or mind-control them into taking wrong actions. They can block an ally’s sensations of pain or confer deadly focus. Advanced psycasts induce mass vomiting in crowds of foes, teleport objects or people, drive crowds of enemies or herds of animals berserk, or render allies temporarily invisible for stealth attacks.

Quests will reward you with new allies, unique implants, archotechnological artifacts, gear, royal titles, faction goodwill, and more. Quest givers may even provide special helpers during the quest – for example, a quest may ask you to fight a huge mechanoid cluster, but also include help from elite Imperial cataphracts to make the battle winnable.

The purpose of quests is to generate dramatic stories that couldn’t happen otherwise. Quest challenges are grander and more exotic than day-to-day defense, but they only happen if you accept them.

Hosting quests ask the player to host a group of dangerous prisoners, haughty royals, derpy pets, hunted refugees, or other guests. The guests may be injured or healthy, useful allies or helpless burdens, single or numerous. They may be hunted by mercenaries, pirates, mechanoids, or more. You might need to get the guests to an escape shuttle under fire.

Construction quests ask the player to build something special, and sometimes, to protect it from attacks.

Assistance quests ask you to send some of your colonists to help an ally for a time.
Site quests open nearby sites that present opportunities, threats, and mysteries.
Threat quests present special combinations of mechanoid clusters, raids, animal attacks, atmospheric effects, weather, and more, in exchange for rewards.

One final quest comes after you have climbed the ranks of Imperial nobility. Host the Imperial High Stellarch and his elite Stellic Guards in your luxurious court, protect them from their enemies, and be invited to leave the rimworld as an honored royal guest.

Mechanoids can now create mechanoid clusters – groups of new mechanoid buildings which work together to present a unique tactical challenge.

Mech clusters always appear in an initially dormant state. The player can take the time to decide and execute a plan of attack. This puts the player on the offensive, which contrasts with the defense-oriented fights in the base game. Mech cluster elements include:

– World condition makers that poison the air, darken the sky, or create some other world condition.
– Shields to block bullets or mortar fire
– Factories to assemble new mechanoids over time.
– Beacons to call reinforcements.
– Turrets, mortars, and surrounding walls.
– Unstable power units which you can attack to create explosions, or steal.
– Alarm systems of various types.
– Mechanoid defenders including the new Pikeman sniper mech.

Each mech cluster generates with a unique layout, presenting a unique tactical puzzle. Some of them will require a frontal assault. Others may be susceptible to mortar bombardment. You may be able to plant explosives inside the cluster before waking it up. A few can be defeated with a key sniper shot to a critical structure. There are many other tactics. Mech clusters can even be used to your advantage if you can lure foes or undesired allies into them.

Imperial technology mixes ancient weapons and ultratechnology. They wield plasma swords, electrical zeushammers, and hypersharp monoswords. Some of their weapons can speak directly to the wielder through a psychic link. These “persona weapons” are frighteningly effective, but bonding to one is a lifelong commitment.

This expansion includes a new full album worth of new music by Alistair Lindsay, composer of the original RimWorld soundtrack. 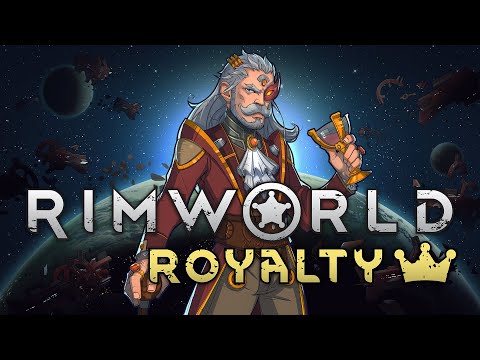 Release Date : 02/2020 Protection : Steam
Discs : 1 Genre : Indie
The Empire has arrived. Their honor-bound culture wields hyper-
advanced technology, while bowing to the ancient traditions of kings
and queens. Now they settle the rimworld, and seek allies.
Colonists can gain royal titles bestowed by the Empire. A Knight or
Count can call upon the Empire\’s elite troops in times of need, bond
with unique bladelink weapons, and wield psychic abilities.