DescriptionScreenShotsSystem RequirementsTRAILER.NFO
About This Game
I Hate Running Backwards is a hardcore adrenaline packed shoot’em down that puts the emphasis on destruction and fighting never-ending waves of enemies!
Pick your character and blast away enemies with a high powered arsenal of shotguns, lasers, rocket launchers, singularity cannons and all the weapons you can get your hand’s on! Get stronger by earning perks to decimate challenging bosses and climb the leaderboards to show who’s the best runner out there!

Sam and friends get stuck in the mixed space-time continuum and have to battle their way through different time periods to rid them of Mental’s minions!

Intense never-ending action will have you destroying wave after wave of enemies on your way to the final boss. You think you’re done when you do? Think again! The game loops and sends even tougher enemies at you. Lucky for you that the arsenal of weapons you pick up along the way is more than enough to help you deal with the threat.

KEY FEATURES
– Are you Serious? – Chose from a roster of characters like Serious Sam, The Bullet, Lo Wang, Rambro, and Richard among others and bring their unique arsenal to the battlefield!
– Swing it like you mean it! – Use your mighty melee weapons to lay waste to enemies and destroy the environment!
– Guns blazing! – Chose from and an arsenal of close to a 100 weapons ranging from assault rifles, shotguns and rocket launchers to orbital lasers, guided missiles, and disintegrations beams!
– Shoot ‘em down! – Turn the shoot ‘em up genre upside down with Sam doing what he hates the most – running backwards!
– Come at me bro! – Fight your way to the top of the leaderboards in standard and daily modes. Show you’re friends and the world that you’re the best runner among them all!
– Who’s with me? – Fight side by side with a friend in the couch co-op multiplayer mode for 2 players and remember to leave some ammo for your buddy.
– Destructible environment – Watch as you and your foes destroy everything in your path while battling each other.
– Expand your arsenal! – Complete achievements to unlock rewards ranging from new weapons, characters and difficulty modifiers! 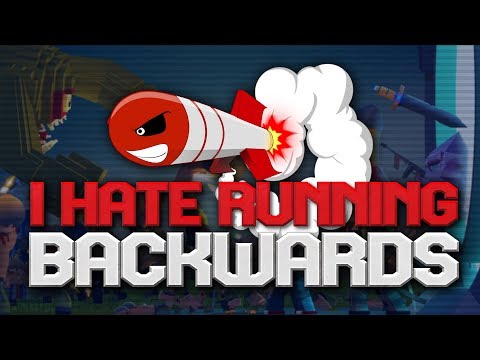